The Smokestop Filter for BlueAir 400 series of air purifiers is ideal for environments exposed to heavy gaseous pollutants, such as tobacco smoke, ethylene oxide, harmful VOCs, and odors.

Using the same HEPASilent technology as particle filters, the 400 Series SmokeStop filter removes 99.97% of harmful particles as small as 0.1 microns in size.

Those particles include, but not limited to, dust, pollen, viruses, and mold spores. In addition to activated carbon, this filter uses polypropylene and polyethylene thermally bonded fibers to capture harmful airborne particles.

The gradient filter structure is naturally anti-bacterial and fiber shedding resistant; so the only thing you’ll add back into your environment is clean air.

Blueair recommends changing the filter in your air purifier every 6 months.

The use of a filter with activated carbon in your air purifier can result in lower airflow and CADR. 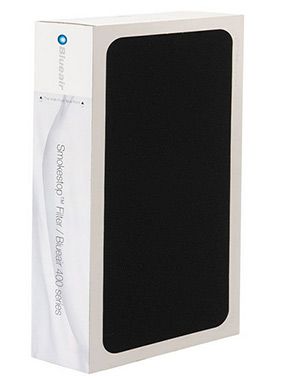 Use these replacement smoke filters with 400 series air purifiers from Blueair. The kit comes with 3 particle filters with enhanced active carbon for use in rooms with heavy ...
119.99
Buy this item

Related Articles
Up to 70% off the latest air purifiers

Not sure which air purifiers to choose? We have done research for you. Check out best rated air cleaners

Choose best air purifier for your needs based upon features and settings it comes with. We have already made comparison easy for you. Just click compare next to purifiers you are interested in!

Send this to a friend